Johannesburg Airport Car Hire, your spring board into Africa.

People from all over the world travel to Johannesburg and continue on into Africa.  Travellers include Britain, Australia, America, and more recently the Eastern countries.  From Johannesburg you can radiate down to Kimberley the diamond capital and onto CapeTown.

With inter transfers between Johannesburg and Lanseria airports.

Johannesburg Airport also called OR Tambo International Airport has the largest Hertz car rental fleet of cars.  The Johannesburg airport branch of Hertz is open 24/7  365 days of the year – it never closes.  Assistance is always available either in person or over the phone from anywhere in South Africa.

Johannesburg airport is the hub for International flights and domestic flights.  From here onward connections are often made to surrounding provinces and countries.  Taxis, Car Hire, and Trains, the high speed Gautrain will whisk you to various destinations at 160 kph. It services both Johannesburg & Pretoria.  Hertz Johannesburg Airport Car Hire is housed in the multistory car park in the centre right of the photograph.  The train and station is clearly visible in the middle of the photograph.  Should you wish to take the train and have your car hire delivered the next day direct to your hotel, then booked it for delivery. 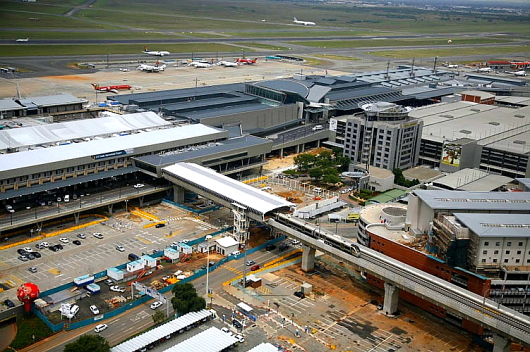 Johannesburg airport is located on the M1 Motorway next to the town of Kempton Park, Gauteng, South Africa. 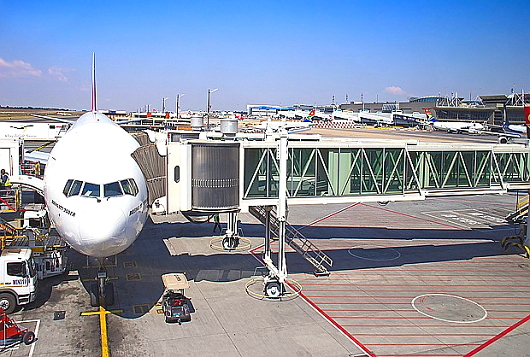 Johannesburg Airport opened to commercial flights in 1952.  Jan Smuts Airport was the original name after Field Marshal Jan Christiaan Smuts.  Smuts was a prominent South African and British Commonwealth statesman, military leader and philosopher.  Remembered for bringing South African strength into World War two.  Later he escorted the King & Queen of England and their two Princesses on their South African tour in 1949.  The Airport was renamed on October 2006 to Oliver Tambo Airport, or OR Tambo Airport.    Oliver Tambo was an anti-apartheid revolutionary who was the President of the African National Congress (ANC)

In 1886 George Harrison found Gold on a farm called Langlaagte.  Johannesburg sprung up as a small town on the Gold Reef.  Mining commenced and gold laden rock extracted.  To separate the gold from the rock it was first crushed.  Gold extraction was far from perfect.   Large amounts of Gold remained in the ore and mine dumps grew as the waste piled up.

“The streets of Johannesburg are paved in gold”

From Johannesburg Airport you collect your Car Rental and radiate out to Sun City, Kruger Park, or Drakensberg holiday resorts.

Spoil her with some retail therapy in the vast shopping malls of Johannesburg
What a surprise!