We offer a wide variety of car hire and airline choices at George Airport.  Based at the start of the famous Garden Route Holiday. George airport car hire is always in demand.  The Heart of the Garden Route along the southern Cape Coast.  Originally built in 1977 and extended extensively.  It was originally known as P.W. Botha Airport.  Named after the state president of the time who lived in the nearby area of Wilderness.

George airport is a delightful country style domestic airport situated approximately halfway between Cape Town and Port Elizabeth in the Garden Route of South Africa.  For travellers, short on time, to travel from all the way from Johannesburg or Cape town.  Who wish to enjoy the beauty of the Garden Route and the Tsitsikamma forests this is and ideal airport to arrive at.  Book your flight and car hire right here.   Then fly in and drive off on a exploring adventurous self drive holiday.  Northwards to Oudtshoorn, Eastward to Knysna, and Westwards to Mossel Bay – what a great place to be ……

A view of the Country Town of George at the foot of the Outeniqua mountains.  The famous Outeniqua Pass and the original Earthen Road Montagu Pass named after John Montagu. 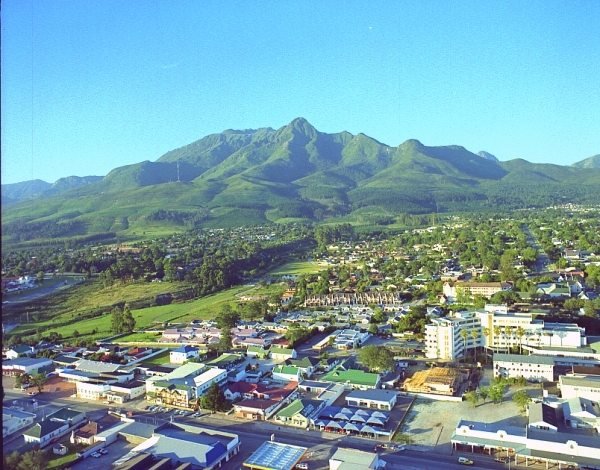 Being centrally situated George is idea for those travellers, pressed for time, and who wish to fly straight into the Garden Route, pick up their car hire and head off.  Much to do and see along the route with various stop overs, an exciting adventure towards Port Elizabeth (approx 350 km).  You travel through The Wilderness, over the Knysna lagoon and through the little town.  Knysna makes for an ideal 2 day stop over allowing time to explore the surrounding area.  Oudtshoorn to the north, Plettenberg Bay to the east.   Between July and October see the whales along the coast.  The Tsitsikamma Forest, and on to Port Elizabeth with the Addo Elephant Park.   Dropping the car at Port Elizabeth Airport and flying home.  What an adventure ….

Spoil him/her with a week-away surprise!